Some sites are more suitable than others for wind energy power.  There are several evaluations that need to be performed prior to selecting wind energy as your alternative source of power, one being the wind power density evaluations. Wind power density is measured in watts per square meter and calculated the amount of wind available for the conversion by wind turbines to power at a potential site. The map and the chart below show wind sources in the state of Texas. 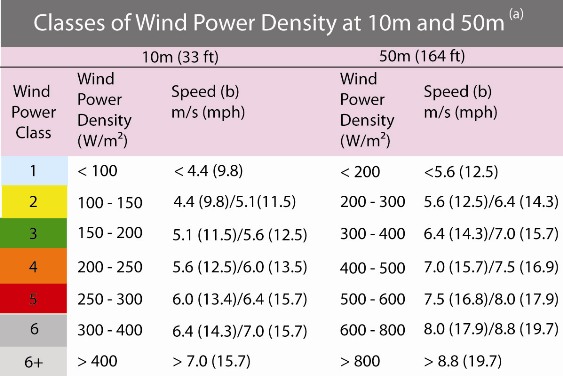 How do wind turbines work?

There are two (2) fundamental groups of wind turbines: horizontal-axis and the vertical-axis.

Horizontal-axis turbines need to be pointed in the direction of the wind in order to operate appropriately. Some advantages to using horizontal-axis wind turbines is that fact that they have a high efficiency since the blades move perpendicular to the wind and being that it is on a tall tower base it is able to withstand substantial wind gusts.

Vertical-axis wind turbines do not need to be pointed into the wind to be effective. This is said to be an advantage in areas where the direction of wind varies quite often.

The City of Houston and Wind Power Energy

In 2010, 50 megawatts, roughly 34% of the City of Houston’s total electricity load is purchased from wind energy, a milestone that demonstrates the City’s commitment to protecting the environment, saving taxpayer dollars and creating alternatives to rising conventional electricity prices.

Beginning on July 1, 2008 a quarter of the City’s operations were powered by wind energy from Texas wind farms. Because the City is one of the biggest consumers of energy in the region, its five-year contract with alternative energy had an important impact on the electricity budget. The price of electricity was fixed at 7.5 cents per kilowatt-hour, representing significant savings against rising conventional energy prices.

The City expects to use as much as 1.7 billion kilowatt-hours of this renewable energy in the next five years. This is equivalent to the amount of kilowatt-hours needed to power 28,000 homes each year. It also helps reduce the need to build more expensive power plants for the region’s rising energy needs.

Steps to Lowering Your Energy Costs:

Opt for purchasing some of this Energy Star rated household appliances next time you are in the market:

- Refrigerator and Freezer: these items are NEVER turned off and are constantly running in you home. By switching to an energy-efficient model you will see a very fast return on your investment.

-  Dishwasher: purchase a unit with a booster heater. This raises the temperature to the incoming water to 140°F, this allows for you to change the setting on your home water heater down to 120 °F, which can save you on average 10% on your dishwashing energy costs.

-  Washer and Dryer: The typical American household washes approximately 400 loads of laundry per year and using about 40 gallons of water per full load. Experts suggest that if your unit is more than 10 years old by replacing it you can save over $135 annually.2 Dryers are not Energy Star rated so be sure to get one with a moisture sensor so it will turn itself off when the clothes are finished drying.

Consider some of these free or low cost steps:

-  Using the microwave instead of the oven

-  Turn off the computer and other appliances when not in use. (When possible use power strips instead of plugging your computer into the wall outlet, that way when you turn off the power strip, it is OFF)

- Make use of natural lighting as much as possible.

-  Use LED of fluorescent lighting in exchange for incandescent (remember not to forget about energy efficient Holiday decorations, night lights and outdoor motion sensor lighting)

-  Turn off lights when leaving the room. This includes ceiling fans for they are not used to cool the room, but rather the occupants.

·  According to the United States Environmental Protection Agency, heating and cooling your home amounts to 45% of your utility bill. Heating and cooling systems in the United States emit 150 million tons of carbon dioxide into the atmosphere every year. Maintaining and upgrading your household HVAC equipment is ideal when it comes to performance and saving money on energy costs.

Water-Heating accounts for approximately 12% of the average homeowners’ annual energy costs. Selection is key when it comes to reducing your monthly water heating bills.

The quickest payback of all is an A/C “tune up” inspection for anyone that hasn’t had one lately. Scheduling these inspections annually is a worthwhile investment.